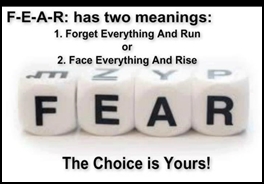 Wowzers, it’s a new year already! I can’t believe it. In honor of 2015, we are going to kick off this New Year right by dedicating the whole month to learning how we can absolutely crush this year by conquering our fears of failure.

Before we dive into the nitty-gritty, I want tell you a quick story about input. We all have friends or family members or even coworkers who influence us by their input, right? In fact, my dad used to always tell me, “Never take advice from your uncle Albert because he’s broke.”

What he meant by that was don’t ask for input from others that can’t influence you in a positive direction.

To clarify what I’m saying here’s a little story:

Picture it – Phoenix, Arizona… There’s a horrific monsoon outside, but I had to “man-up” and run to the grocery store to grab some milk. When I was in line, the checkout clerk (who had blonde hair and fair skin just so you can picture it), was having ONE HECK of a bad day.

The lady in line before me was arguing with her about an expired coupon. From what I overheard, it sounded as if the coupon just expired and the lady demanded her discount. The checkout clerk apologized but refused to discount the item. After three or four minutes of verbal abuse (including blaming the clerk for the weather, the economy, and even the coupon not being large enough to begin with) the clerk finally just gave up and called her manager.

The manager came on over and (after listening to the situation) ended up taking the side of the customer. He then berated the clerk for not being more empathetic and even threatened to fire the lady right in front of us.

By the time I got up to her, her blonde hair turned red, her face was bright red and she just looked like the cruise director of the Titanic. She was really in the dumps. Well, as I typically do, I greeted her with a ton of enthusiasm…

She replied: As if you don’t know.

I said: Yeah, well, I’m guessing that the guy I just saw outside the grocery store standing in the rain, begging for change wishes he was you right now. That guy has no job, no money, and no future to call his own. All of his belongings are sitting next to him in a backpack and I’m guessing that your day is not as bad as his.

So I said again: So, how are you doing?

She smiled and said: You know what, thank you. I needed that. 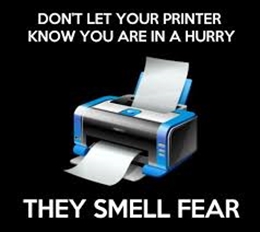 You would have never seen such a radical change in a human being and it was all because I helped her shift her attitude. The weather was still the same, the economy still sucked, and she was still in major hot water with her boss, but, but she was looking at life through a different lens because the input changed everything.

The way she was receiving and processing the input was the only thing that changed. She actually ended up giving me a 10% discount on all my groceries and we said good bye.

I only tell you this little story because it is so, so important for you to feed your mind with positive thoughts at all times. I would want to bet that that lady has a reasonably good chance of keeping her job if she just keeps up her new attitude and starts focusing on the glass being half full.

We can apply the same concept to you in your investing career. Keep a positive attitude with your eye on the prize and chances are you are going to be able to achieve your financial dreams.

Now obviously, before we can focus on our dreams we need to address a universal fear:

The fear of failure. You see, the fear of failure stops people from achieving their dreams. This is why people stay in nice, safe, secure jobs and they never venture out on their own. Now there’s nothing wrong with having a job that you like and you want…

But if you want something more in your life and you want to make the kind of money that supports the lifestyle of your dreams, then you need to start to train your mind to embrace failure.

Yes, in some cases having fear is a good thing because it keeps us out of harm’s way. But the truth is, most people manufacture their own fears. That little voice inside starts saying things like:

Whatever your reason for fear is, it’s usually created by you and has no foundation in reality.

Now, I would like you to start thinking of failure as part of the success process. When you think of failure think of two things: 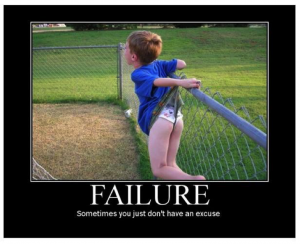 Henry Ford once said that:

I really dig that. It makes a ton of sense to me.

Let’s talk about 3 major failures in history we can really learn from:

The corporation, known as the Wall Disney Company, makes an average revenue of more than $30 billion annually. Walt Disney started his own business from his home garage and his very first cartoon production went bankrupt. During his first press conference a newspaper editor ridiculed Walt Disney because he had ‘no good ideas in film production.’ Makes you think, doesn’t it?

Michael Jordan is widely known as the greatest basketball player of all time. He’s a phenomenal athlete with a unique combination of grace, speed, power, artistry, improvisational ability and unquenchable competitive desire. Jordan singlehandedly redefined the NBA superstar. Before joining the NBA though, Jordan was just an ordinary person. So ordinary that he was cut from his high school basketball team because of his lack of skill. Can you believe that?

This one is great. In 1943 there was a severe shortage of rubber. A scientist named James Wright and his team at the GE Research Lab were trying to develop a new silicone hard rubber. After a year of research, Wright made a huge mistake while mixing a combination of chemical compounds. The result was a gooey and seemingly useless rubber compound instead of the hard rubber like they wanted to get. Frustrated he threw the goop on the ground and it bounced back at him. Wright smiled and said, “That was silly.” That, friends, was the birth of silly putty.

Your happiness is manifested through your view of the world. How you feel is a direct reflection of how you process fear.

It’s perfectly normal to be afraid at times… but training your mind to realize that having fear is an opportunity for you to build strength of character, focus, sharpen your problem solving skills, become more creative, build valuable experience and knowledge and increase self-confidence and self-worth. 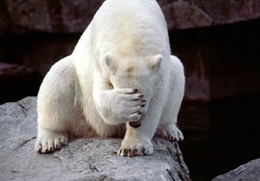 Once a quarter I have the privilege of getting together with 40 of the top real estate investors in the entire country and masterminding with them. Some of the investors in my group fix and flip houses, some are wholesalers, some are professional landlords and some are private money lenders. Together we have a combined net worth of more than $1 billion.

Even though we all have different business plans, the common thread that makes us all successful is how we each as individuals deal with our fear of failure.

You see, successful people all have an expectation that at some point in our careers we’re going to fail. We’re all human and, well, humans make mistakes…

Just like learning how to ride a bike, it’s okay to fall down immediately after you take off your training wheels. The important thing is to have enough self-awareness that you can learn from your mistakes.

What I want you to realize is that you can’t take failure personally. Instead, view it as a stepping stone.

Think about these things:

The benefits of failure far outweigh the feeling you might have if and when you do fail.

“All life is an experiment. The more experiments you make the better.”

Your chances of getting things right on the first try are so slim that you should just expect to get it wrong and just focus on how you’re going to learn and grow in the future.

Well, I hope I helped some of you see that changing the way you view and process your input can make the difference between succeeding in investing or not.

Come back for a piece of the puzzle next week when we’ll focus on Crushing the Year Part 2: The Positivity Hack.