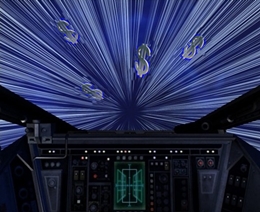 Today, I’m going to do a case study on a property that I bought at auction and made great money on. I’m gonna walk you through the process so you can see how this played out.

I bought this property on West Willow Avenue from the trustee sale at a foreclosure auction for $159,200. The last person to own this property paid 370K. Because the market was in decline at the time, I got a great deal.

Lemme stop right there for a minute because…

You might be saying, ‘Hold on Cody, what is a trustee sale?’ Well, I’m glad you asked. 😉

I’m talking about the local auctions – you go down where you can meet investors that are buying and selling properties, where you can actually meet hard money lenders. You can also meet people who are trying to learn the business. At auctions, you can even put together a majority of your power team in a matter of a couple of hours. 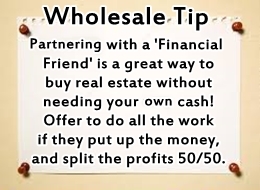 I suggest you do that, whether you’re a new investor or you’re an advanced investor. Why? Because you should be refreshing and building your database, on all sides, all the time.

If you’re a wholesaler, you don’t have a whole lot of money or credit, you want to start getting some inventory you can wholesale and sell to other people. So, head to auctions and start talking to the guys bidding and winning. Get on their lists. Have them send their properties to you so you can wholesale them.

If you want guys to buy those properties from you, go along the outside. Talk to all the guys that are looking for properties to buy that may not have all the cash. You can match them up with the hard money lenders that are down there as well. You can build it really, really quickly if you do it the right way.

Okay, let’s talk about this Willow Avenue deal. It was a trustee sale we bought for $159,200. We bought it because that house at fair-market value when we bought it was 225K to 250K. Great deal, right? We knew what it was really worth because a similar property with the same 2,700 square feet, same numbers of bedrooms and baths, with a pool, just like this one sold for 229K – and ours was nicer.

Now, whoever owned it last was in the middle of a remodel: brand new pool, brand new hot tub and new tile flooring sitting in boxes ready to be installed. The estimated repair costs were around 20K. I had a money partner who was willing to put up the 30% down so we leveraged his money with hard money.

You’re probably wondering why we used hard money with its 18% interest, which will cost us a $1,000 bucks extra. Well, it’s very simple.

It’s not the cost of capital that counts when you have a great deal. It’s the availability of the capital. (More on that later…)

To buy properties from auction in my state, I’ve got to have 10K to bid and then I have to pay the full amount within 24 hours. Now, some states require you to pay immediately. 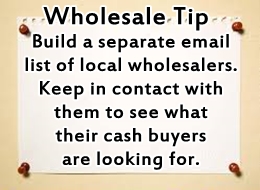 You’ve gotta to know the auction process in your state. Find out how it works. Arm yourself with information before you go.

I’m going to use my financial partner’s money for my 30% down. Hard money’s going to finance the other 70%.

Me, personally… I’ve got no money in this deal. None, zero, zilch, nothing.

Now, because I know the auction process in my state, I knew that every time I buy a property at an auction, I immediately get insurance. In other words: Get the property secured and get it insured. It cost us just $67 bucks for insurance for the amount of time we’d have the property.

To secure and clean it up, which you should do the day you buy it, was $470 bucks.

Must Have: Multiple Exit Strategies

I wanna switch gears briefly to talk about how you always need to go into auctions prepared with multiple exit strategies. You can make money in any market. Houses will sell in any market, if you buy right by determining which is the best approach for that deal.

In this Willow Avenue deal, I had multiple exit strategies:

I decided to send this property out to our database of wholesalers and other real estate investors – we immediately had a response from an investor, who had buyers, but didn’t really have the wherewithal to buy on his own. It was nothing but wholesaling… 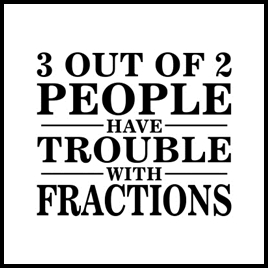 Luckily, my partner was a strong negotiator and said, “Pound sand, man. There’s no way. The margin is too big. How about this… We’ll take your buyer and sell it to him for $180,000 and we’ll give you $4,500 in cash to bring in the buyer.

Any guess on this wholesaler’s response? “Absolutely,” he said.

Look, that’s quick money for him because we went into contract with these guys in 2 days and closed in just 10 days.

Show Me the Money’s Math

Let’s break down the numbers so you can see how this deal worked out.

See, we decided just to get in, get paid and get out – instead of getting in, spending a month fixing it up and then sitting on the market for a good 90 days – with our capital tied up.

The exit strategy we chose was basically a co-wholesaling operation. (Wanna learn about co-wholesaling? Check out my recent post that explains everything you need to know.)

Granted, we would have made GREAT money rehabbing it, but we decided to get in, get paid and get out because we followed what the numbers were telling us:

We had to pay for 30 days of payments for the hard money, which cost us $2,000 total. That was our $1,000 origination plus the payments we had to make, plus the $67 for insurance. It cost us another $470 to secure and clean up the property. 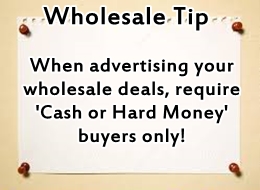 Is that a good deal or is that a great deal?!

I Ain’t no Dummy

Of course I know what the wholesaler was gonna do to make some BIG bucks, heck, I could have done it myself…

For my situation, I determined that spending 10 days in this deal to get in, get paid and get out, and move on to the next deal was the better choice – even though my profit was significantly less than what I could have brought in had I rehabbed it myself. PLUS, my capital would have been tied up for a looong 90 days, meaning it was not available to use for other deals.

Sometimes having the funding tied up for a period of time is okay – if the payoff is big enough once the capital comes back to you.

Of course rehabbing it myself would have raked in the dough, but wholesaling it instead – even though it brought a lower profit – made sense for me because I quickly got my capital back and was able to turn around and reinvest it in my next deal within just 10 days (as opposed to 90 days).

And you know what? A nearly 14K payday for just 10 days of work is pretty awesome to me.

The Velocity of Money

So you have to think, ‘Do I perhaps have more to gain if I consider the velocity of money?’

According to Investopdeia.com, the Velocity of Money is:

The rate at which money is exchanged from one transaction to another, and how much a unit of currency is used in a given period of time. Velocity of money is usually measured as a ratio of GNP to a country’s total supply of money.

So here’s how that applies to REI…

When you’re looking at a deal, you’ve gotta determine if it’ll make better sense to take advantage of the velocity of money principle and get in, get out, get your check and walk in to the next deal with capital that was quickly returned…

…versus having it sit unavailable for other deals for a larger pay day.

This principle is definitely something to think about when you’re weighing your multiple exit strategy options.